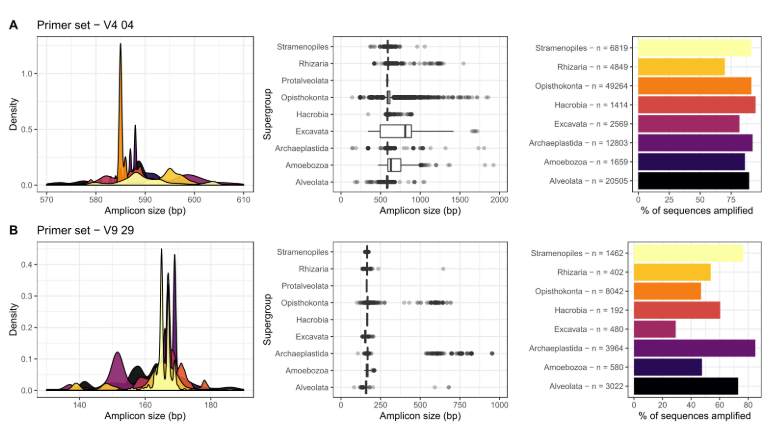 Metabarcoding of microbial eukaryotes (collectively known as protists) has developed tremendously in the last decade, almost solely relying on the 18S rRNA gene. As microbial eukaryotes are extremely diverse, many primers and primer pairs have been developed. To cover a relevant and representative fraction of the protist community in a given study system, an informed primer choice is necessary, as no primer pair can target all protists equally well. As such, a smart primer choice is very difficult even for experts and there are very few on-line resources available to list existing primers. We built a database listing 285 primers and 83 unique primer pairs that have been used for eukaryotic 18S rRNA gene metabarcoding. In silico performance of primer pairs was tested against two sequence databases: PR2 version 4.12.0 for eukaryotes and a subset of SILVA version 132 for bacteria and archaea. We developed an R-based web application enabling browsing of the database, visualization of the taxonomic distribution of the amplified sequences with the number of mismatches, and testing any user-defined primer or primer set (https://app.pr2-primers.org). Taxonomic specificity of primer pairs, amplicon size and location of mismatches can also be determined. We identified universal primer sets that matched the largest number of sequences and analysed the specificity of some primer sets designed to target certain groups. This tool enables guided primer choices that will help a wide range of researchers to include protists as part of their investigations.