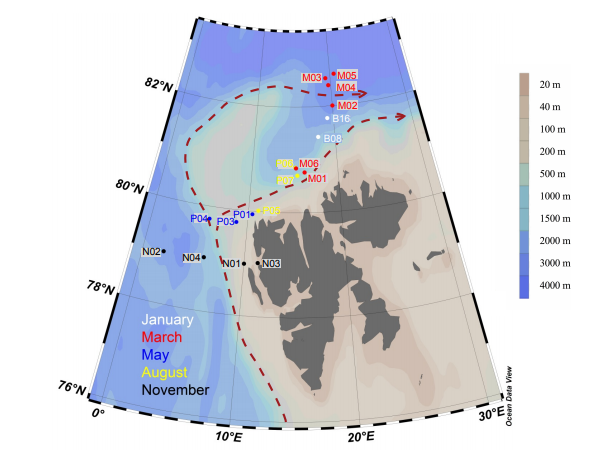 An 18S V4 rDNA metabarcoding dataset of protist diversity in the Atlantic inflow to the Arctic Ocean, through the year and down to 1000 m depth.

Arctic marine protist communities have been understudied due to challenging sampling conditions, in particular during winter and in deep waters. The aim of this study was to improve our knowledge on Arctic protist diversity through the year, both in the epipelagic (< 200 m depth) and mesopelagic zones (200-1000 m depth). Sampling campaigns were performed in 2014, during five different months, to capture the various phases of the Arctic primary production: January (winter), March (pre-bloom), May (spring bloom), August (post-bloom) and November (early winter). The cruises were undertaken west and north of the Svalbard archipelago, where warmer Atlantic waters from the West Spitsbergen Current meets cold Arctic waters from the Arctic Ocean. From each cruise, station, and depth, 50 L of sea water were collected and the plankton was size-fractionated by serial filtration into four size fractions between 0.45-200 µm, representing the picoplankton, nanoplankton and microplankton. In addition vertical net hauls were taken from 50 m depth to the surface at selected stations. From the plankton samples DNA was extracted, the V4 region of the 18S rRNA-gene was amplified by PCR with universal eukaryote primers and the amplicons were sequenced by Illumina high-throughput sequencing. Sequences were clustered into Amplicon Sequence Variants (ASVs), representing protist genotypes, with the dada2 pipeline. Taxonomic classification was made against the curated Protist Ribosomal Reference database (PR2). Altogether 6,536 protist ASVs were obtained (including 54 fungal ASVs). Both ASV richness and taxonomic composition were strongly dependent on size-fraction, season, and depth. ASV richness was generally higher in the smaller fractions, and higher in winter and the mesopelagic samples than in samples from the well-lit epipelagic zone during summer. During spring and summer, the phytoplankton groups diatoms, chlorophytes and haptophytes dominated in the epipelagic zone. Parasitic and heterotrophic groups such as Syndiniales and certain dinoflagellates dominated in the mesopelagic zone all year, as well as in the epipelagic zone during the winter. The dataset is available at https://doi.org/10.17882/79823