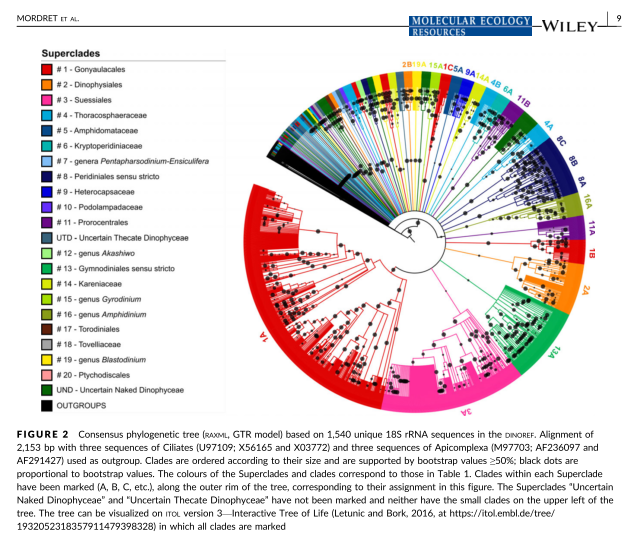 Dinoflagellates are a heterogeneous group of protists present in all aquatic ecosystems where they occupy various ecological niches. They play a major role as primary producers, but many species are mixotrophic or heterotrophic. Environmental metabarcoding based on high-throughput sequencing is increasingly applied to assess diversity and abundance of planktonic organisms, and reference databases are definitely needed to taxonomically assign the huge number of sequences. We provide an updated 18S rRNA reference database of dinoflagellates: DINOREF. Sequences were downloaded from GENBANK and filtered based on stringent quality criteria. All sequences were taxonomically curated, classified taking into account classical morphotaxonomic studies and molecular phylogenies, and linked to a series of metadata. DINOREF includes 1,671 sequences representing 149 genera and 422 species. The taxonomic assignation of 468 sequences was revised. The largest num- ber of sequences belongs to Gonyaulacales and Suessiales that include toxic and symbiotic species. DINOREF provides an opportunity to test the level of taxonomic resolution of different 18S barcode markers based on a large number of sequences and species. As an example, when only the V4 region is considered, 374 of the 422 species included in DINOREF can still be unambiguously identified. Clustering the V4 sequences at 98% similarity, a threshold that is commonly applied in metabarcoding studies, resulted in a considerable underestimation of species diversity.