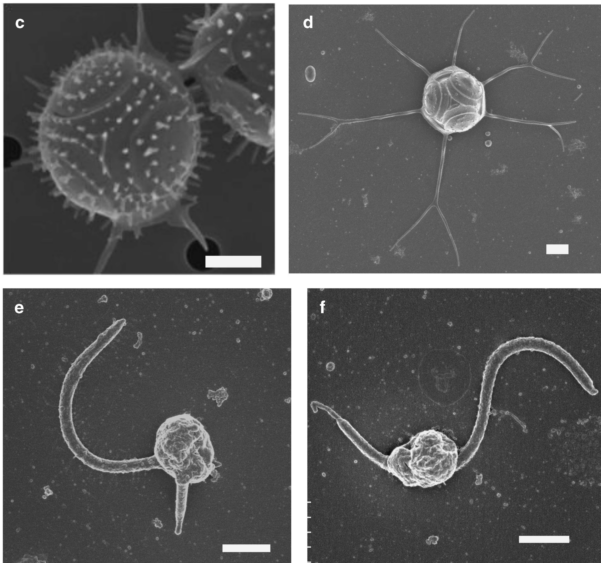 Diversity and oceanic distribution of the Parmales (Bolidophyceae), a picoplanktonic group closely related to diatoms

Bolidomonas is a genus of picoplanktonic flagellated algae that is closely related to diatoms. Triparma laevis, a species belonging to the Parmales, which are small cells with a siliceous covering, has been shown to form a monophyletic group with Bolidomonas. We isolated several novel strains of Bolidophyceae that have permitted further exploration of the diversity of this group using nuclear, plastidial and mitochondrial genes. The resulting phylogenetic data led us to formally emend the taxonomy of this group to include the Parmales within the Bolidophyceae, to combine Bolidomonas within Triparma and to define a novel species, Triparma eleuthera sp. nov. The global distribution of Bolidophyceae was then assessed using environmental sequences available in public databases, as well as a large 18S rRNA V9 metabarcode data set from the Tara Oceans expedition. Bolidophyceans appear ubiquitous throughout the sampled oceans but always constitute a minor component of the phytoplankton community, corresponding to at most ~4% of the metabarcodes from photosynthetic groups (excluding dinoflagellates). They are ~10 times more abundant in the small size fraction (0.8– 5 μm) than in larger size fractions. T. eleuthera sp. nov. constitutes the most abundant and most widespread operational taxonomic unit (OTU) followed by T. pacifica, T. mediterranea and the T. laevis clade. The T. mediterranea OTU is characteristic of Mediterranean Sea surface waters and the T. laevis clade OTU is most prevalent in colder waters, in particular off Antarctica.