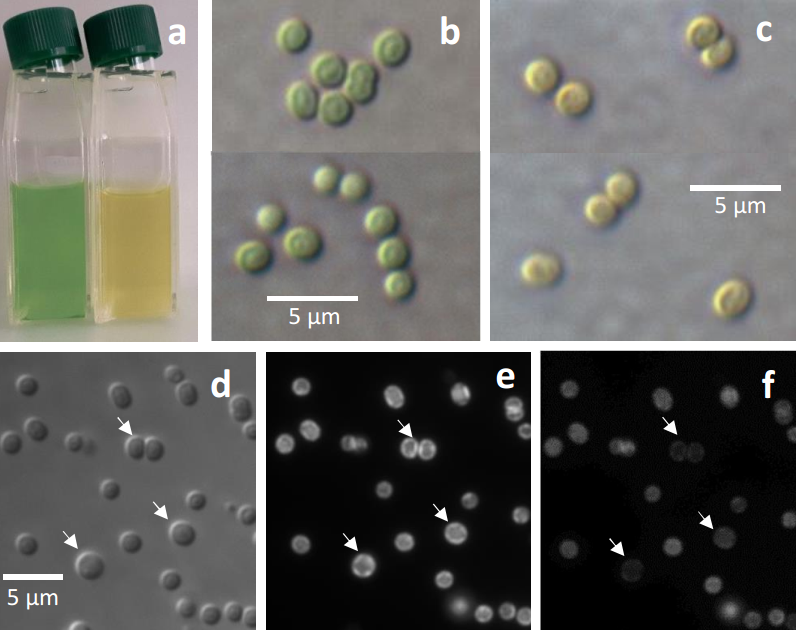 All characterized members of the ubiquitous genus Acaryochloris share the unique property of containing large amounts of chlorophyll (Chl) d, a pigment exhibiting a red absorption maximum strongly shifted towards infrared compared to Chl a. Chl d is the major pigment in these organisms and is notably bound to antenna proteins structurally similar to those of Prochloron, Prochlorothrix and Prochlorococcus, the only three cyanobacteria known so far to contain mono- or divinyl-Chl a and b as major pigments and to lack phycobilisomes. Here, we describe RCC1774, a strain isolated from the foreshore near Roscoff (France). It is phylogenetically related to members of the Acaryochloris genus but completely lacks Chl d. Instead, it possesses monovinyl-Chl a and b at a b/a molar ratio of 0.16, similar to that in Prochloron and Prochlorothrix. It differs from the latter by the presence of phycocyanin and a vestigial allophycocyanin energetically coupled to photosystems. Genome sequencing confirmed the presence of phycobiliprotein and Chl b synthesis genes. Based on its phylogeny, ultrastructural characteristics and unique pigment suite, we describe RCC1774 as a novel species that we name Acaryochloris thomasi. Its very unusual pigment content compared to other Acaryochloris spp. is likely related to its specific lifestyle.