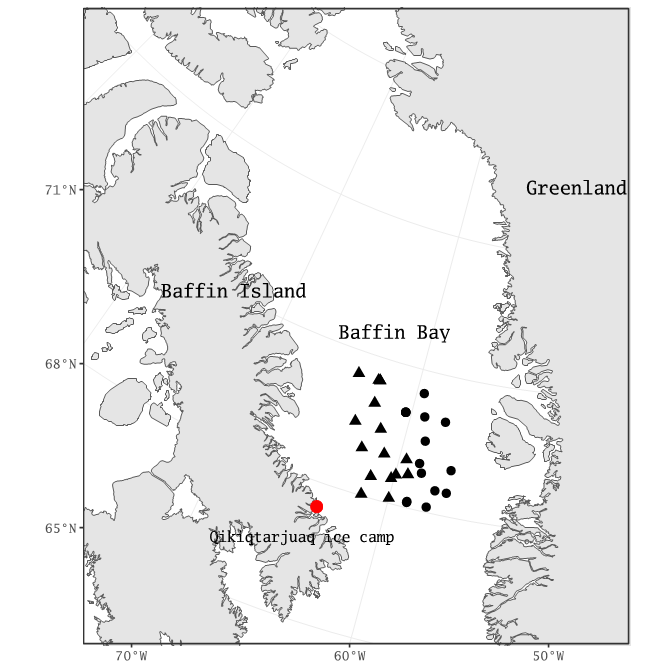 Baffin Bay, located at the Arctic Ocean’s ‘doorstep’, is a heterogeneous environment where a warm and salty eastern current flows northwards in the opposite direction of a cold and relatively fresh Arctic current flowing along the west coast of the bay. This circulation affects the physical and biogeochemical environment on both sides of the bay. The phytoplanktonic species composition is driven by its environment and, in turn, shapes carbon transfer through the planktonic food web. This study aims at determining the effects of such contrasting environments on ecosystem structure and functioning and the consequences for the carbon cycle. Ecological indices calculated from food web flow values provide ecosystem properties that are not accessible by direct in situ measurement. From new biological data gathered during the Green Edge project, we built a planktonic food web model for each side of Baffin Bay, considering several biological processes involved in the carbon cycle, notably in the biological, lipid, and microbial carbon pumps. Missing flow values were estimated by linear inverse modeling. Calculated ecological network analysis indices revealed significant differences in the functioning of each ecosystem. The eastern Baffin Bay food web presents a more specialized food web that constrains carbon through specific and efficient pathways, leading to segregation of the microbial loop from the classical grazing chain. In contrast, the western food web showed redundant and shorter pathways that caused a higher carbon export, especially via lipid and microbial pumps, and thus promoted carbon sequestration. Moreover, indirect effects resulting from bottom-up and top-down control impacted pairwise relations between species differently and led to the dominance of mutualism in the eastern food web. These differences in pairwise relations affect the dynamics and evolution of each food web and thus might lead to contrasting responses to ongoing climate change.