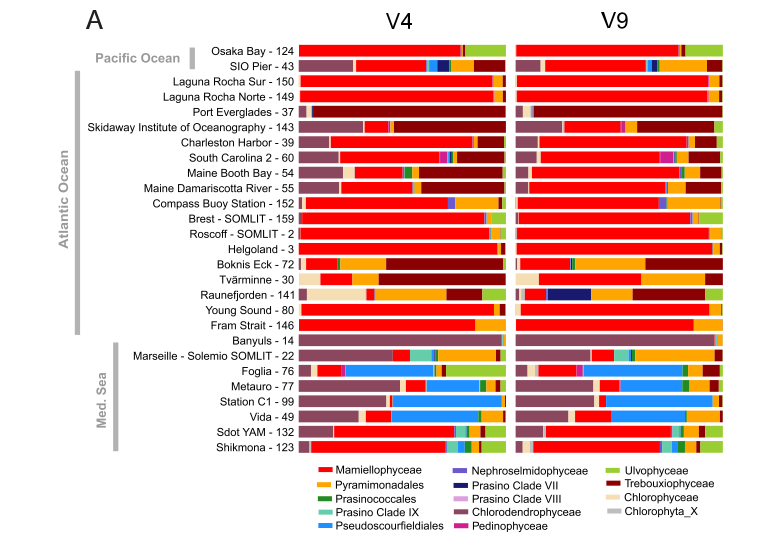 Comparison of Chlorophyta compoisition during OSD with V4 vs V9

We compared the composition of eukaryotic communities using two genetic markers (18S rRNA V4 and V9 regions) at 27 sites sampled during Ocean Sampling Day 2014, with a focus on photosynthetic groups and, more specifically green algae (Chlorophyta). Globally, the V4 and V9 regions of the 18S rRNA gene provided similar images of alpha diversity and ecological patterns. However, V9 provided 20% more OTUs built at 97% identity than V4. 34% of the genera were found with both markers and, of the remnant, 22% were found only with V4 and 44% only with V9. For photosynthetic groups, V4 and V9 performed equally well to describe global communities at different taxonomic levels from the division to the genus and provided similar Chlorophyta distribution patterns. However, at lower taxonomic level, the V9 dataset failed for example to describe the diversity of Dolichomastigales (Chlorophyta, Mamiellophyceae) emphasizing the lack of V9 sequences for this group and the importance of the reference database for metabarcode analysis. We conclude that in order to address questions regarding specific groups (e.g., a given genus), it is necessary to choose the marker based not only on the genetic divergence within this group but also on the existence of reference sequences in databases.